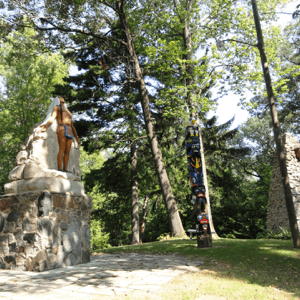 During my visit to Camp Chesterfield in the summer of 1961, I attended a séance at Mable Riffle’s home where both Mable Riffle and Mamie Shultz-Brown were the attending mediums.  During the séance I was asked by my Indian Guide, Tinkletoe, if I would make the effort to obtain a totem pole for Camp Chesterfield.  I immediately rose to the occasion and upon returning home [to Canada] began the process.

I first contacted, by mail, the Indian Affairs department of the Government of Canada and requested the name and address of an Indian who could make a totem pole.  A reply came shortly afterward and I began communicating with Chief Charles H. Dudoward. 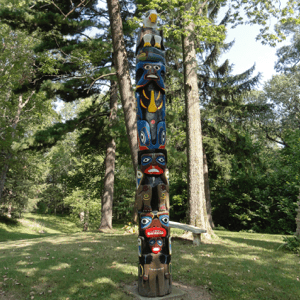 He sent me three sketches of totem poles which I sent to Mable riffle through her daughter-in-law, Helen Riffle. The sketches were returned and the totem pole sketch which the Board chose was the same one which I wished to see at Camp Chesterfield. I placed the order with Chief Charles H. Dudoward of the Thunderbird Totem Pole Shoppe in Port Simpson, British Columbia, Canada. Upon a request from the Chief for a deposit and upon receiving the monies he proceeded to carve the totem pole.

In late spring, I was informed the totem pole was completed and ready for packing and shipping. Shortly afterward, I received a request for $65.10 from Lindsay’s Cartage & Storage Limited in Prince Rupert, British Columbia for packing and shipping. It was sent out immediately and upon receipt of the monies, the totem pole was shipped and custom papers were sent to Helen Riffle. Helen Riffle received a request from the U.S. Customs for the necessary duties. The totem pole was cleared through U.S. Customs upon receipt of the monies and arrived at Camp Chesterfield shortly thereafter.

Ladoit Riffle, Mable Riffle’s son, received a donation of one telephone pole from the Indiana Telephone Company and had it placed by same. The totem pole was attached to the telephone pole just the day before Camp Opening in 1962.

Symbolism and Story of the Camp Chesterfield Totem Pole 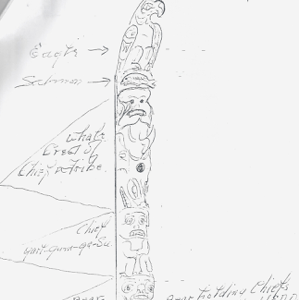 [Editor’s Note: This is the original sketch by Chief Charles H. Dudoward.]

The Totem pole illustrates the legend of how Salmon came to the Rivers Inlet, British Columbia, Canada.

Chief Garl Gum Ga Su had a little daughter named Yeda. Soon after Yeda learnt to talk, she told her Mother she was hungry for salmon. On being told no one knew what a salmon was, she commenced to cry and refused all foods. Fearing she would die, Chief Garl Gum Ga Su called his wise men and asked, what are salmon and where could they be obtained? None knew. At that moment, the flying spiritual Eagle entered the council to announce “the salmon are fish people and I will find them.” The Eagle left and flew for days till he located the home of the salmon. Now, the salmon had a chief called Chief Meah Si La, whose little son was playing and jumping in the water. The Eagle watched and when no one was looking, seized the fish and flew off. Chief Meah Si La commanded his people to retrieve his son. They swam fast but could not overtake the Eagle.

The Eagle arrived at the mouth of Wanook River depositing the little fish in shallow water where upon Chief Garl Gum Ga Su placed a net at the entrance confining the little fish. The Wanook women hastily made long ropes of shredded cedar bark and when the salmon people ascended the river, the men captured them, tying them side by side through the gills and fastening the end of each rope to the Totem pole in front of Chief Garl Gum Ga Su’s home, hence the name NME ISS BEEK which means “Tethering Totem Pole.”

When Yeda saw the salmon, she ceased crying. In joy, the father held the first salmon feast.

Reading the Totem Pole from top to Base