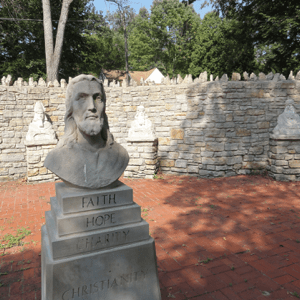 In the beautiful setting of Camp Chesterfield nestles one of the most marvelous tributes to the religions of the world that has ever been erected.  The first awe inspiring spectacle that greets the eye of the visitor is the gigantic stone fountain, beautifully illuminated with multi-colored neon lights, spraying thousands of gallons of water skyward every hour.

From the fountain, the visitor walks down the grassy slope to the Garden of Prayer, the shrine wherein thousands have made communion with Spirit, there to receive health of body and peace of mind.  In this calm and peaceful atmosphere you may really feel the touch of Spirit. 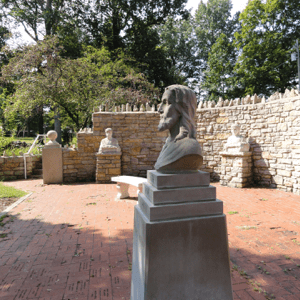 Further down the shady grove is the memorial to religious leaders of all times.  It is doubtful if there is anything similar in the entire world.  In the center of a semi-circular wall stands Osiris, symbol of the ancient civilization and religion of Egypt and the River Nile.  On his robe are hieroglyphics:  the circle, meaning Sun, and the crab, representing sun worship.  To the right around the wall are busts of Zoroaster, founder of Magi, Abraham the Hebrew Patriarch, Mohammed, the mighty Arab, and Zeus, the Greek king of Gods.  To the left of Osiris is the bust of the Chinese Lao-Tse, bearing on his head the words, “to understand and to proclaim.” Next is the great Hindu, Buddha, and the Chinese Philosopher, Confucius, also wearing the Chinese inscription of Lao-Tse.  Vardhammana, founder of Jainism, completes the semi-circle.

The great religious founders of history are gathered in one large arc, each with his arms imprisoned in rough natural stone, each has his eyes turned toward the center of the circle, where stands the pedestal supporting the bust of Christ, free and unfettered, head thrown back, with eyes upraised toward the Creator of All.  The fierce countenance of the Moslem, the wisdom of Confucius, Lao-Tse and Zoroaster, the inscrutable Buddha and Vardhammana, are completely dominated by the passionate sweetness, and impregnable strength of the spirit of Christ.

The next spectacle on this Trail of Religion is the tribute to the American Indian, those freedom-loving, God worshiping first inhabitants of the country in which we are now living.  The Indian is close to the thoughts of every Spiritualists and no fitting of a tribute to him could be conceived than this life-sized statue of the American Indian atop an eight foot pedestal, palms upturned, face looking toward the source of all light and life.

This Trail of religion can mean as much to you as you may make of it.  As you wander down the trail you will go, in thought, to the ecstasies of religious feeling from the past to the present.  There is nothing like it in all the world—erected through the help of many kind donors, it has been built at the cost of many thousands of dollars to help you enjoy your visit to Camp Chesterfield, and to take home with you a new understanding and appreciation of your religion.