From the Archives . . . Vintage Camp Chesterfield

[Editor’s Note:  The following article appeared in the September 25, 1955 issue of the Spiritualist publication, The Psychic Observer.]

Said to be the finest Spiritualist edifice of its kind in the world.

ONE of the highlights of this summer’s annual season at the Chesterfield Spiritualist Camp was the ceremony of dedication of the recently completed Dr. J.E. Hett Art Gallery.
This special ceremony, August 31st, was under the direction of the Rev. Clifford L. Bias, St. Petersburg, Florida.
One of the many imaginative and beautiful structures, the new art gallery stands as a graceful fusing of stone, steel and glass near the Western Hotel.  The gallery building, designed by Arthur B. Henning, encircles an area of 200 by 75 feet, divided more or less equally between three large rooms, connected by a unique glass corridor arrangement.
Dr. J.E. Hett, principal contributor to the cost of erecting this colorful and elaborate gallery, attended the ceremony.  He was accompanied here for the event by a host of his Canadian friends.  The doctor hails from Windsor, across the river from Detroit, Mich., and is widely known throughout Canada for his searching experiments along highly specialized lines, particularly in the field of cancer research.

The job of acquiring and arranging the numerous paintings, sketches and other treasured mementoes in the field of Spiritualism, the Rev Mrs. Riffle was ably assisted by Juliette Ewing Pressing, and many of Chesterfield’s staff mediums.  Due to her wide and full acquaintanceship in the field of Spiritualism not only in America, but in England as well, Mrs. Pressing brought considerable and valuable help to the opening of the gallery.
Among notables present for the event:  John Meyers, New York City, internationally-known psychic photographer.  He was in charge of his own exhibit during his brief visit here with several of his friends.  This showing consisted of several interesting mementoes in the field of his interest, which includes the camera used when he presented demonstrations of psychic phenomena in London and New York City. 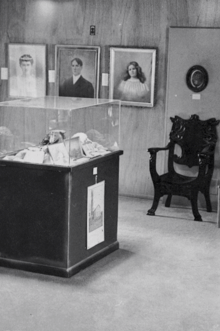 Angel M. Villamil, Puerto Rican psychic artist making a special trip to Chesterfield for the dedication, personally supervised his own exhibit of three exquisite paintings.
Other distinguished visitors, Dr. and Mrs. R.B. Bishop, Kansas City, Missouri, were present.  Dr. Bishop donated the three extremely rare psychic paintings done by the Bangs Sisters.
The colorful dedicatory program was followed immediately by opening the glittering glass doors to the public.  The crowds were then able to closely inspect and enjoy the beauty and meaningful history of the numerous exhibits.
To describe all the contents of the expansive structure would be to do no less than compile and lengthy catalog of the mementoes of Spiritualism.  The highlights of the many hundreds of items of rare possessions of the new gallery and museum include such things as…but let the visitor start at the beginning.
After entering the cool confines of the gallery through the swinging glass doors of the modernistic entrance, the visitor is greeted by a bronze plaque, donated by Frances and Joe Haney of Odessa, Texas.  This bronze message reads: “Mable Riffle—47 years of service, 1955” and followed below by an alphabetical listing of names of mediums officially associated with the Chesterfield Camp during the past half century.  A star is placed after the mediums in the following list who have passed away.

The impressive and interesting factors of the unusual gallery become obvious to the visitors as he leaves the plaque and glances to the left to see a life-size photographic enlargement of the statue “Hope,” donated by C.M. Nancy Hanks, Detroit, Mich.  On entering the center room of the gallery, the dominating thing here is the life-size statue of “The Madonna,” which properly sets the mood for the entire building and its contents…and purposes.
In this center room is located, in three parts, the noted Fox exhibit.  This exhibit has high and critical meaning for Modern Spiritualism.  This exhibit consists of many personal effects of three world-noted Fox sisters, Leah, Marguerite and Katie, who were identified with the psychic field when as young girls, they were constantly accompanied by sharp and instant rappings. This was in their father’s home, John Fox, in Hydesville, New York, more than a century ago.
These exhibits were loaned for a limited time by Miriam Buckner Pond of Hudson, Ohio—a direct descendent of the noted Fox sisters.
Included in this room, as well as elsewhere in the building are rare and excellent examples of precipitated paintings.  Aside from their deep meaning to Spiritualism, they still retain their interest as examples of fine art.

What is rarest on exhibit here is a relative thing.  It depends on the person and point of view.
Also in this exhibit is a colorful mural beautifully executed for a corner selection of the west room by Miss Carol Yattaw of Anderson, now a third year student of fine arts at the John Herron School of Art, in Indianapolis.  It forms a natural background for an exhibit of play animals, used to entertain children at the camp for approximately a half-century.  This exhibit is of high sentimental value to hundreds of now grown persons who first saw them when they lived here.
A partial listing of the exhibit shows many other things of high interest.  This list includes:  Rare antique hand-woven and embroidered Madonna altar piece, dated 1637.
Miniature portrayal of Lincoln’s birthplace, named Sinking Spring Farm, Elizabethtown, KY., donated by John S. Wallgren, Chicago.  An oil painting of an Indian camp, the work of Vaughn Strode, depicting an Indian pilgrimage to a ceremonial ritual.  A portrait of Andrew Jackson Davis, founder of the Lyceum movement, donated by the Rev. Mable Riffle.
Here also is a famous pen sketch, Spirit Donor, whose caption says, “Mine is the real life; Mama, yours is but a shadow.”  Famous Blue Bird slate writing, received through the mediumship of Charles Winans.
Shown also and highly important to visitors, is the placement of the original and official badge of the organization, insured at Rochester, N.Y., in 1898 during the first convention of the New York State Spiritualist Association.
The noted violin of William Aber is on exhibit here.  It was used in materialization séance in the early years of the century.  There is also here a rare picture of John Slater, donated by his son, John, Jr., of San Francisco. 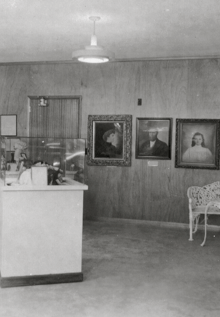 Of high historical meaning is the large and impressive picture called, “The Lady on the Black Horse.” Persons familiar with the story of the famous Serbian retreat in September of 1915, World War I, will recall her as the inspired and then unidentified girl who led disillusioned, disgusted and defeated thousands to safety.  The girl in the picture became known as Mrs. M.A. St. Clair Stobart, and was recognized as one of England’s greatest propagandists for Spiritualism.
An autographer photo of the Sir Conan Doyle estate is shown, and donated by R.G. Pressing.  He was presented this valued memento when visiting Sir Arthur on the great man’s estate in the south of England.  Mr. Pressing also has caused to be exhibited here an oil, “A Study in the Glen.” This shows the hut in which Sir Arthur wrote the famous Sherlock Holmes series.  This painting was donated through the offices of Mr. Pressing by Lady Doyle.
No one should permit themselves to miss seeing the noted precipitated paintings, all donated by Juliette Pressing.  These objects d`art were received through Augusta Farris at the Gunn-Merrill home in Grand Rapids, Mich.

Mable Riffle has also placed, among numerous other valuables, a picture, “Flower Painting,” received through the mediumship of Lizy Conner.  Other objects include:  “Dulcie,” and “Catherine Lipp,” both received by William Lipp, Cincinatti, Ohio.
“Adrey Alford,” donated by Mr. and Mrs. Frank Alford.  “Don Keeler,” donated by Mr. and Mrs. Joe Keeler, Fort Wayne, Ind.  “Lillian Keeler,” donated by Mr. and Mrs. Joe Keeler. “John West,” and “Martha Grey,” both pictures donated by Dr. F.G. Clark of Indianapolis.  “The Young Man,” donated by Benjamine, of Seymour, Ind.  “Alex P. Mckee,” grandfather of Rebecca K. Fowler and “Bornal Tobias,” were donated by Henry Tobias.
Work of the noted Bangs Sisters, life-size efforts, “Rose” and “Emily,” and the Famous Fox Sister Collection are here through donations of Miriam Pond.  Life-sized precipitated paintings of the Bangs Sisters’ “Queen Victoria,” is here.
There is a statue of a grandson of John McCormick, who built the first log cabin at what is now at the foot of W. Washington St., in Indianapolis, Ind. is here and donated by George W. McCormick, of Escondido, Calif.
There is Auric Psychic Painting, by Harold Sharp, of London England.  A photograph, “Inspiration,” done by Pfc. Martin Bruithaupt while in the Southwest pacific during 1954.  Here is an autographed pen sketch entitled, R.G. Ingersoll.
On exhibit is a crystal used by Leopold Lee, Louisville, Ky., and donated by Mable Riffle.  Also shown is a tomahawk and arrow heads received through the mediumship of John W. Bunker.  Here also is a tom-tom which belonged to Chief Mexes.
There is a rare spirit pen sketch of Lucillia Lovejoy, born 1810 and slain by Indians in 1834.  The artist is Willa P. Anderson, and the object was presented by L.N. Kirk.  Trudie Lamb of Buffalo, N.Y., has on exhibit two spirit paintings.  Spirit paintings, pastels-on-canvas, executed by S.A. McDonald, London, England, and was donated for the gallery by Mrs. Pressing.  The titles are “The White Sisters,” “Purple Lotus,” and “Kandu Singh.”
Donations from Frances McVey of Chicago, Ill., include three paintings, “The Cross,” “Annunciation,” and a “Study of Spirit Fantasy.” A donation from C.M. Nancy Hanks, Detroit, Mich., includes a life-size photo of Hope.  Shown also is a fine sketch of Dr. J.E. Hett, honored visitor, by Gabriel, whose inscription signature also appears on thirty-nine other rare and interesting psychic paintings that grace the mahogany-paneled walls of the gallery.
All in all, thousands of visitors have already availed themselves of the fine art examples of the new and modern gallery erected at great expense on the camp grounds.  Mrs. Riffle and other officers of the organization wish to impress on the public that this museum or gallery, while of primary interest in the field of Spiritualism, is there for the enjoyment of all who care to visit the relaxing and enjoyable atmosphere of the new structure.