DATE: Sunday, September 15, 2019
TIME: 5:00 PM
(doors will open at 4:30; a reception will immediately follow the film
in the Maxon Cafeteria)
PLACE: Chapel in the Woods,
Historic Camp Chesterfield
Admission: Free

John E. Fetzer was a prominent 20th Century radio and television pioneer and long-time owner of the Detroit Tigers Major League Baseball club. John lived most of his adult life in Kalamazoo, Michigan, and had a serious, life-long dedication and interest in mystical and metaphysical pursuits. 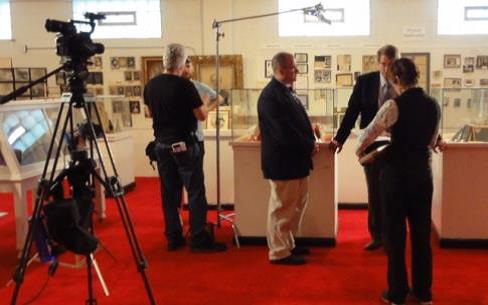 camera crew during filming in the Hett Art Gallery and Museum in April 2017.

For 40 years, John attended one or more weekends at Camp Chesterfield during many (if not most) summers and he particularly came to develop a deep trust for the talented mediumship of Charles Swann, Lillian Dee Johnson, and Clifford Bias, Camp Chesterfield resident mediums.

In this film, Mr. Fetzer’s great-nephew, Bruce Fetzer, and Camp Chesterfield Historian and Archivist, Rev. Prof. Todd Jay Leonard, leisurely stroll the grounds of Camp Chesterfield visiting various landscape displays and buildings, discussing in detail John Fetzer’s frequent visits to the camp and the value he gained from attending camp events and séances. Bruce and Todd sit and chat at the ‘toad stools’, visit the Trail of Religion, the Tree of Life bookstore, the Western Hotel, and the Hett Art Gallery and Museum, as well as visiting Rev. Wahna Irvine’s séance room.

In the film, the audience will see and hear about many of the spiritual artifacts John brought home over the years from Camp Chester-field, including personalized Spirit Cards and Spirit Photos. Also featured are the opening minutes of an actual séance!

All attendees of the première will be gifted with a hardback copy of the book “John E. Fetzer and the Quest for the New Age” by Brian C. Wilson. 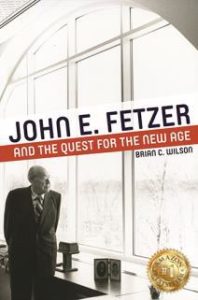 This will all come about with the infusion of spirituality into science.” — John E. Fetzer